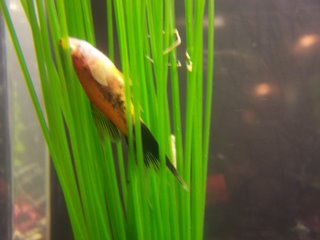 Stupid fish. Died after 4 days. Last night Dale and Andy came home and I heard Dale yell "Marmalade!". Of course this fish has no actual name mind you. Then Andy says "The fish dies and now you name it!?".
Got the new Beck this morning "The Information". He's a scientologist. What's up with that anyway. I guess his parents were but word is he's a dick anyway. He let the rockstar thing go to his head.
Here's an clip of an interview with Steven Drozd from the lips...
CM: You recently toured as opening act for Beck’s tour and then served as his backup band for his sets. Did you ever think twice about going out as someone’s backup band?

SD: Well, we did but it was Beck so it seemed like a great idea. We didn’t think about it all ‘cause it was fucking Beck! He writes fucking great music, you know? Yeah, he just called out of the blue, “Hey, I’ve got a record coming out. What are you guys doing? You want to come be my band?” So we got together and rehearsed for a couple of weeks to figure out what songs we wanted to do. We heard his new record and we were like, “Fucking yeah!” We never realized the amount of hard work that would be involved. Actually, there was just this warring between the two factions of Beck and Wayne for a while there. There was this article about us in Esquire Magazine last month. If you see it, read it. Wayne never said anything about Beck being a dick, but one of the headlines of the article was like, “Beck Is A Dick.” This writer hung out with us and traveled on our bus for two days. He was there for two whole days, and the reporter was like, “Guys, I don’t know about Beck. He’s not as cool as I thought.” We were like, “Well, whatever angle you want to work for your story is cool with me,” ‘cause I hung out with the guy a lot. We got drunk and we had a good time. I ended up feeling pretty uncomfortable that he said some mean things about Beck, you know?

CM: And Beck took it personally?

SD: Well, Beck emailed Wayne and was like “Why is this happening?” Wayne said, “I had nothing to do with it. People ask us questions and we’re usually pretty honest.” So Beck said, “Well, what kind of answer is that, Wayne?” I’m too much of a coward to confront someone and go, “Yeah, this is bullshit,” but we had some pretty tough times on that tour. I think we thought there’d be more jamming and more hanging out and playing music and it wasn’t like that. We actually became his backup band. We’d rehearse then he’d show up. We’d run through it a couple of times and he’d say, “Yeah, I guess we’ll do that one tonight.” We never actually hung out.

CM: So was it worth it? Did you take anything out of that tour that you could use?

SD: I took a lot of money from it! We got real paid. This sounds really fucking hokey, but I think it made us all better musicians. Just because we had to learn so many fucking songs! We had to learn 25 of his songs in a week and a half. Then we learned another 15 while we were on the road so that we’d have a big variety to choose from. It just helped us all. Plus, we were playing twice a night. We’d do the Lips show first. Then we’d walk offstage just to come back on and do Beck’s set. That’ll fucking get you in shape, man. We’re all playing better now. Plus, I got some good stories here and there. Beck’s a weird dude, for sure.

CM: OK, you opened up that one. What do you mean by that?

SD: I did, didn’t I? Let’s just say he has a very strange…diet. He has food issues (laughs). He has special dietary needs that are strange. We actually had a chef go on tour with us. That’s living there, buddy! He’s a weird guy, man. (laughs) We’d met him a few times before this all went down and we’d talk. When we were on tour, we weren’t on the same bus. We had different tour buses. It was just really weird to spend every day with him for two months.
Email ThisBlogThis!Share to TwitterShare to FacebookShare to Pinterest