ARE YOU FUCKING KIDDING ME!!!

"Are Americans having an opportunity to ask all the questions and are we receiving straight answers from our opponent?" Palin asked. The crowd shouted, "No!"

--You have got to be shitting me. Or more so, I shit myself. Republicans can't use the mainstream media excuse because the mainstream media is in their fucking pockets. Are you kidding me... The only platform McCain and Palin have been running is the same thing the Democrats have been running but one week LATER!!! fuck me and my tall hat. The status quo is poor right now. I make almost 30K a year and I am struggling. I cant even imagine the rest of America. Rich, greedy fatcats put us where we are today and PEOPLE STILL DON'T WANT TO BELIEVE IT. Calling Obama a terrorist is more important to them. Fuck you, you'll never be famous. Get over yourself. Be nice to people. Go for a walk and appreciate this shit we have before you die of starvation or some shit. Where is the Chariots of Fire song when you need it.


I've said it before and I'll say it 10,000 times again. Future President Obama wants to bring science and technology back into the hands of AMERICANS. He wants to fund entrepreneurs and scientists and freethinkers to right the wrongs this country has done. Do you seriously think that McCain will improve our forgien relations. PEOPLE AROUND THE GLOBE FUCKING HATE OUR GUTS, people who used to think we, AMERICA, was the shit. Now, they want to shit on our flag. That is George Bush's fault. NOT MY PRESIDENT, never has been. When times were tough, he told us to go and shop. FUCKING SHOP!


...you're kidding right? Remeber when Obama gave his speech overseas? Hundreds of thousands of people came to see him. I work with a handful of forgieners who would rather slit their wrists than see another George Bush in the White House... that speaks volumes to me. Bush has wiped his ass with my flag far too many times over the last eight years.

...Low and behold, McCain is part of that party, his choice... he has made his bed and there is not a pair of presidential pajamas on it. 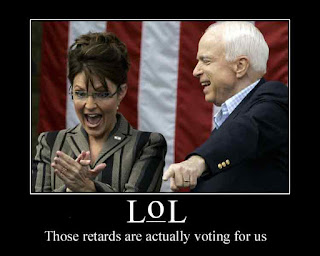