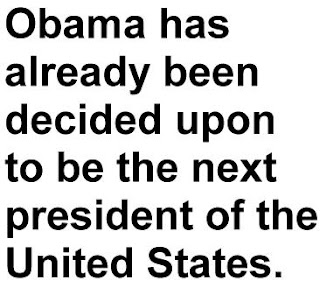 This is awesome. The article said Obama had more hypnotic suggestions in his speeches than... wait for it... HITLER! HAHAHAHAH! ZING! good one... duder.

Check out this TSHIRT from Tshirt Hell... It's things like this that you wish you came up with. Also if you get the chance, watch this new Obama video on the Keating scandel. When the savings and loan industry collapsed, Keating's failed company put taxpayers on the hook for $3.4 billion and more than 20,000 Americans lost their savings. John McCain was reprimanded by the bipartisan Senate Ethics Committee, but the ultimate cost of the crisis to American taxpayers reached more than $120 billion. Pretty tasty stuff here...

The evidence, from the admittedly “Liberal” New York Times, as well as the very “Liberal” PBS Online News Hour PROVES that this pathetic and unfounded attempt to smear McCain with the crimes of Keating is unmitigated BUNK!

1) Although McCain had dealings with Keating (who was a constituent in McCain’s district), McCain was NOT connected in ANY WAY to the CRIMES committed by Keating (and even The New York Times ADMITTED IT).

2) McCain did NOT support, IN ANY WAY, Keating’s request for regulators to ignore his violations (much less eliminate the regulations).

3) In FACT, even the New York Times admits that the Keating scandal ONLY involved Democrats (which is precisely why the Dems were so DESPERATE to lynch the ONLY Republican they could even REMOTELY connect to Keating)!

“The special counsel to the Senate Ethics Committee has recommended that the panel clear two of the five Senators under investigation for their links to the savings and loan debacle, Congressional officials said today.

In a confidential report submitted to the committee on Sept. 10, the special counsel, Robert S. Bennett, concluded that there was not adequate evidence to merit a full-scale investigation of John Glenn, an Ohio Democrat, and John McCain, an Arizona Republican, several officials said.”

“If Mr. McCain is dropped from the investigation, the political implications could be significant: He is the only Republican under scrutiny, and Republicans could portray the scandal as a Democratic one.”

“The Senate Ethics Committee concluded that Glenn and McCain's involvement in the scheme was minimal and dropped the charges against them. In August 1991, the committee ruled that the other three [DEMOCRATIC] senators had acted improperly in interfering with the Federal Home Loan Banking Board's investigation.”

Click here for the UNDENIABLE FACTS on what REALLY caused the current housing mess (AND the Keating related S&L mess).

Sorry man... Scandals and shenanigans aside... McCain and Obama could be running the same platform and I would still vote for Obama. McCain is old and just too out of touch with technology to be the leader of the future country I want to live in. I want faster broadband and my house to make its own energy. McCain cannot get us there if he cannot even use a computer and that scares me. Palin beLIEving that the earth is no less than 10,000 years old also scares me. I mean NEVER FORGET: DINOSAURS... right?

Face it sbvor. The Republicans have lost the election. Look at yourself in the mirror and practice it: "President Barack Obama". You'll be saying it for the next 4 years. Why do Republicans always want to hide their jerseys. Republican = Bush. Republican = McCain. Same team. Same failure.

McCain is an erratic war-mongering racist.

His wife is a self-diluted pill head.

Palin is an uneducated barbarian.

Her husband is a past member of a political party that wanted to break ties with the U.S. A terrorist by Republican definition.

You'll forget all about this conversation when the market returns and you are making money fueled by a Democratically controlled country.

Until then, have fun living in the The Republic of King George's America. I won't.