Somedays, It's Just Good To Be Kramer... 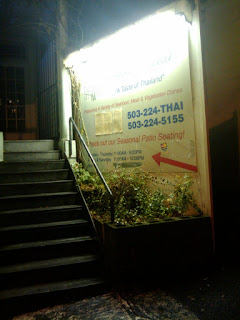 Sunday night we ate at Baan Thai, which as you can see in this image is up a small flight of stairs, and it was fantastic. The waiter had warned us ahead of ordering that the chilies were extra hot this time of season, so we opted for the mildest dishes and some of them were still really hot. Our order included Baan Thai eggplant, yellow curry, spicy crunchy chicken and beef fat with vegetables. It was all so delicious. After wards we went to a house party and had a great time with some good people. Today I tried to get myself to the Velvet Painting Museum but I passed on that gem and chose to meet some people down on Hawthorne for some Seinfeld-esque diner food. I was Kramer. Someday s its just good to be Kramer.

02.department of eagles - in ear park

06.where the wild things are soundtrack

08.modest mouse - no ones first and your the last

10.sparkelhorse - dark was the night

12.blind pilot - 3 rounds and a sound
Email ThisBlogThis!Share to TwitterShare to FacebookShare to Pinterest