SOME COLOR FOR YOUR DESATURATED WORLD... 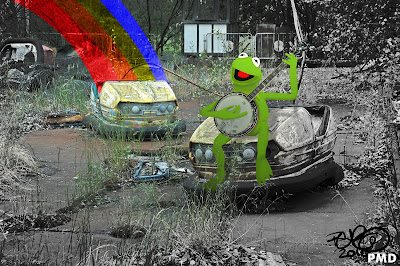 It is not possible to explain their existence using classical geometric optics. The alternating faint rainbows are caused by interference between rays of light following slightly different paths with slightly varying lengths within the raindrops. Some rays are in phase, reinforcing each other through constructive interference, creating a bright band; others are out of phase by up to half a wavelength, canceling each other out throughdestructive interference, and creating a gap. Given the different angles of refraction for rays of different colours, the patterns of interference are slightly different for rays of different colours, so each bright band is differentiated in colour, creating a miniature rainbow. Supernumerary rainbows are clearest when raindrops are small and of similar size. The very existence of supernumerary rainbows was historically a first indication of the wave nature of light, and the first explanation was provided by Thomas Young in 1804.A supernumerary rainbow—also known as a stacker rainbow—is an infrequent phenomenon, consisting of several faint rainbows on the inner side of the primary rainbow, and very rarely also outside the secondary rainbow. Supernumerary rainbows are slightly detached and have pastel colour bands that do not fit the usual pattern.