Got the new, fresh white walls for the cruiser. Hog needed it. Old rubber was torquing and flexing at the seams. It was starting to show its innards. Brought it to CYCLEPATH over on MLK, great group of techs there.

Visited CHA CHA CHA before heading to see THE SECRET WORLD OF ARRIETTY, the new Studio Ghibli film. I was really tired, but it was really good... no Spirited Away, but great story and outstanding animation none-the-less. 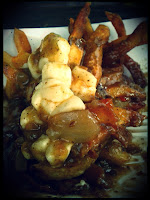 Gave POTATO CHAMPION some support with a classic POUTINE down the gullet. Curds man, curds. They have all sorts of flavors and temptations now. Later on some of us hit up some thrift stores. Scored a new French Press and a Monkey Bread Pan. Gonna make some Monkey Bread Pizza. UPDATE: Made the monkey bread pizza and its was amazing.

Finished up a few posters this weekend along with some wedding invites. One just to the client and one came back from the printers. The ones that just came back look great. Client is please, we're pleased. All around chum-fuckery.

Displaced in the office today. I have no where to sit. Being smashed from all sides and I could sure as shit use a vacation. And concurrently a hundred new jobs as well. How hard and thin do I have to push / stretch before something gives?