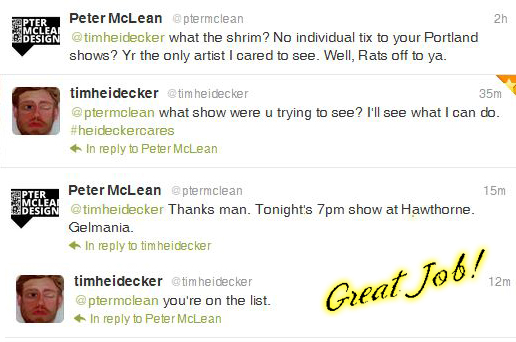 Just to prove the amazing power of Twitter and the AWESOME-NESS of TIM HEIDECKER, I post this. In Portland this weekend is the Bridgetown Comedy Festival. To attend, one must have purchased a wristband who knows how long ago. I didn't know this. I would assume that one would just be able to get a ticket for a certain show... but no. That's not how it works. Well, Tim Heidecker is performing and he was the only artist I wanted to see. So I contacted him on Twitter and esplained to him how silly this was. Low and behold, he put me on the list as proven in this tweet. I'll go tonight and see how true to his word he is. Generally, he speaks up when things are wrong or weird especially if its putting his fans in an awkward position. So, RATS OFF TO YA Mr. Heidecker. I hope to see you tonight.