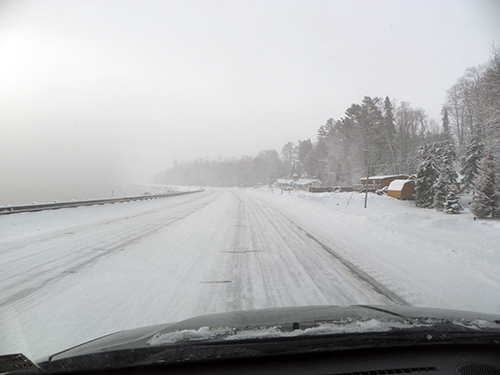 Dan dropped me off at the Portland Airport. I checked in my duffle at the United Desk. Some employee grunted and pointed at a kiosk. My bag was whisked away. I flew to Chicago.

Here I sat for an hour before getting on my flight to Hancock. I struck up some random conversation with my first stranger explorer, Katy, the liberal Geologist from Los Alamos.

The Captain came out and directly told us that there was a good chance we weren't flying to our destination tonight, but we would wait. 5 minutes later he came back on and said it was a no go. I bolted to the United counter and was 8th in line. Chatted up a nice kid from Tech, reminded me of Mike Hammond. Laying on the floor behind me, was my second stranger explorer, Robert, a Computer Science Prof from Tech.

Somewhere in here, a plan hatched about renting a car. Robert, Chicago Mike and I started thinking this was the right thing to do, and I knew Katy was in as well. The three people in line behind me got to see an agent at the United desk, before they shut the desk down! And with about 35 more people left in line! We walked with Katy and our new 5th member, Emily, a 20 year old Tech student to the B concourse. After seeing that the second United desk was three times as long as the first line, Katy decided to pull the trigger and rent a car. Chicago Mike backed out as we scrambled to find one. We tried Dollar and Hertz, but they had a hard time understanding we wanted a one-way rental. Dollar wanted us to return the car to Detroit. That was not going to happen. Finally, Enterprise would rent us a mini-van and the drop off was Marquette, where I was headed anyway. So off we went. 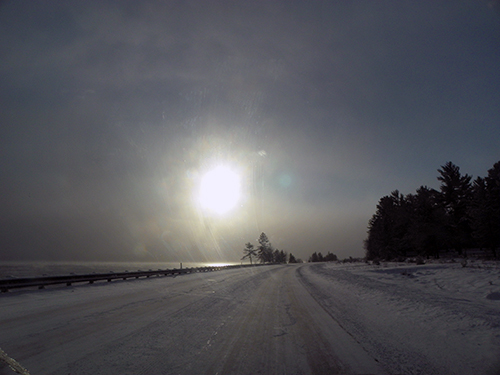 We kept each other up by swapping stories and stopping for coffee, cheese curds and dry danishes. Chicago to Hancock was almost nine hours, and I had one and a half hours back towards Marquette. I stayed up for almost the entire day, and by eight pm, I had been up for forty plus hours.

But I was finally at Brother's home.

My bags were not. They wouldn't arrive for another four days...

First night we ate pork loin, grilled. Next day, we thrifted and went to the antique stores. The next night, we ate home made pasties at Emily's mom's. Next, we headed to Escanaba and ate at Ferdinand's. Andy P. was there. Went to Grandma across the street's house. Got more pasties. Then we grilled out moose burgers and had sweet potato fries. Opened Xmas gifts. Last night there, we ate a Cajun place that was pretty good. I had cheese curds in between everything, even my toes.

It was time to go. That came quick. I single handedly held up the flight from San Fran to Portland by being late. Landed when flight was boarding. Gate was wrong. Trammed to wrong gate. Trammed back to wrong gate. Ran, sweated and made it. Christ -- United. On the flight home, my phone died, and I couldn't signal Dan that I was or wasn't arriving on time. We missed each other. I Max'd and taxied home for a small fee.