...that's all well and great, but is ROTHBURY really banking on the fact that people will buy tickets before even seeing a line up? I for one, will. lol. it was such an amazing time last year that I would go in a heartbeat. Early ticket sales is mere five(5) days away. I really hope that they release an artist line-up this week, i cannot imagine that they won't. I was stumbling around the interwebs and found this cool flash player with a bunch of artist from last years show (click here). Nice job. 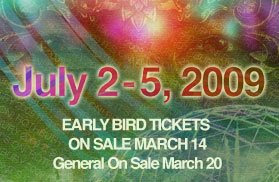