We Were Promised Jetpacks - Wonder Ballroom 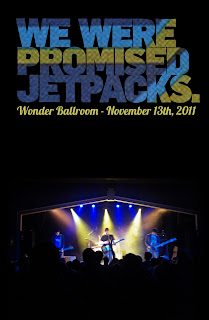 Hiked up to the Wonder last night to see We Were Promised Jetpacks. Its great now that I live like 4 blocks from the Wonder. Walking home after a show is the shit. So much better. WWPJ put on a great show last night, although they seemed to be slightly off. Probably not one of their best shows. The second guitar player had something stuck in his craw, you could tell. Alas, still a great show. "Ambition suits Edinburgh's We Were Promised Jetpacks. Their second album, In the Pit of the Stomach, sees them reaching for the stratosphere with jumbo-sized melodies and completely unrestrained production. In clumsier hands—or, more accurately, in less sincere hands—than those of the Scottish quartet, this would spell disaster, but this group seems to be up to the challenge of building monuments. Drums thump heavily on the downbeats, guitars swirl into thick fogs, and singer Adam Thompson maintains that uniquely Scottish trick of sounding both aggravated and forlorn. Some reviewers seem to have missed this entirely, but We Were Promised Jetpacks are currently making sounds that are fully enveloping in their cloud-swept might."

On a different note, this blog 'o mine just hit 11,000 views. That seems like a high number, right? Thanks for looking world. Cheers, Pter.
Email ThisBlogThis!Share to TwitterShare to FacebookShare to Pinterest